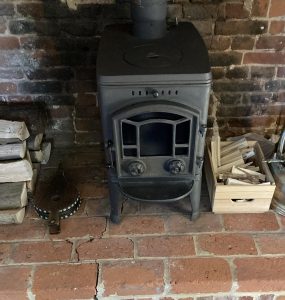 I came across this rather unusual and quite attractive retro/Traditional Stove at a property in Ashdon last week and thought I would share it with everyone. It is unusual as it has a very narrow, but very long fire-box combined with an old fashioned traditional design which is reminiscent of some of the old Morso wood-burning stoves. Like the Morso Squirrel (Squirrel on the sides) and the inside of some Dovre Combination Stoves (Climbing goats on the inside), it has an embossed picture design on the outside of the casting.

It is an attractive image of a draught horse pulling what appears to be a sled loaded with logs with countryside and mountains in the background. Quite an appealing scene of rural life, but unusual to have such a thing on the side of a stove? Still, most attractive and unusual all the same! As I say I don’t know the make of this stove, but if anyone out there would like to enlighten me, I would be interested to learn who it is. Here’s hoping! 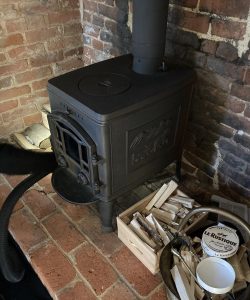