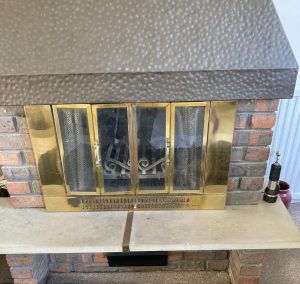 Yes, this is a rather unusual Combination Stove I recently swept at an address in Stebbing. I have not seen one like this previously, although I do see many other combination stoves, usually Dovre or Nord which seem to be the most common varieties. The customer told me that this stove was fitted in the mid 1960’s and was, manufactured in Sweden, but could not remember the makers name or model. There was no plate that could give any idea as to who the manufacturer is or what model it was? I did try and see if I could find anything like it on the internet but was unsuccessful. The customer said although it looks like an open fire that could burn anything, it is actually designed to only burn wood and that it burns the wood very efficiently and thoroughly. The installation is on the original chimney clay liners which date to the early 1960’s.

The customer was also experiencing Jackdaw activity in the chimney. There was no cowl fitted to the open chimney pot, so I suggested fitting an anti-bird cowl as a terminal to prevent the Jackdaws building a nest in the chimney. I gave him contact numbers for Gary Wats of Watson & Woolmer Ltd in Debden, who fits a good quality anti-bird cowl – 01799 541846, (M) 07736 678877