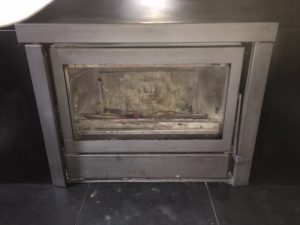 This week one of my jobs was sweeping this Wanders Economic 60 Cassette Multi-Fuel Stove at an address in Ashdon. I thought that I would include this stove in my blog as I don’t do many Wanders stoves and this is the only Wanders Cassette stove that I have come across. So, I have included here it out of interest more than anything else! In the correct setting a contemporary cassette stove can look rather effective and attractive, I think you will agree. Although I know that contemporary is sometimes not to everyone’s taste.

The stove has an unusual double baffle arrangement, with a small hinged bracket over the mouth of the flue and a longer oblong baffle lower down the roof of the stove – This is the baffle that can be seen in the photograph, and which as you can see has been overfired and is reaching the end of its serviceable life. 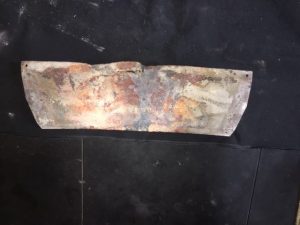 Wanders are a Dutch company who were established by Henk Wenders and commenced production in 1960’s. Henk Wanders bought an old farmhouse in the village of Netterden close to the German border and obtained the necessary permits and permissions to commence metal processing in and around the farm. In the beginning Wanders supplied metal products mainly to other metal companies, but because their products were so popular and because of the advanced technologies they used the business began to grow. Wanders were the first company in the region to work with laser-controlled machines. Through acquisitions and the use of advanced technologies the company expanded steadily and they extended into stove production. Eventually a whole factory was built on the site that employs a large number of local people. Wanders now not only makes fires and stoves, but constructs mobile chalets, the manufacturing of rope and the produce steel storage racks. 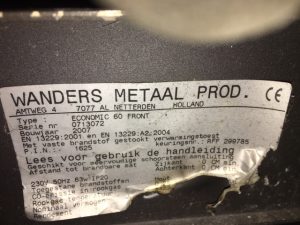