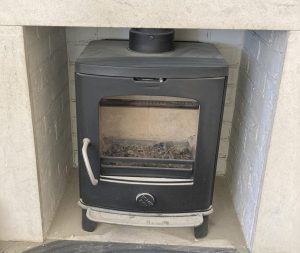 Not a spectacularly unusual or rare stove as I normally feature in my weekly blogs, but I thought I would include this stove as it is the first new Jotul Eco stoves that I have come across on my travels. This is a Jotul F 145 Wood-Burning Stove Swept that I swept recently at an address in Duddenhoe End. It was installed less than a year ago by Thaxted Stoves and had therefore only had one burning season’s usage. Even though the stove is situated in a rather large sitting room, the customer told me that it heats the room more than adequately. I think you will admit that this particular stove has a very contemporary, workman like appearance, sitting well as it does in a very contemporary setting.