The hunting, shooting Theme continues with a Pheasant in the Thatch

Saffron Walden Sweeps Uncategorized The hunting, shooting Theme continues with a Pheasant in the Thatch

The hunting, shooting Theme continues with a Pheasant in the Thatch

I saw this pheasant on a newly thatched roof in Wimbish Green the other day; is this further proof that thatched animals are all about hunting and shooting? Or are they just themed on animals found in the countryside? What is for sure is that there are certainly a lot of them about, particularly around the time of the shooting season. The pheasant shooting season in England and Wales lasts from the 1st of October to 1st February each year. I often think that as many of them are run over on the roads as are shot every year. They seem to be particularly stupid, lazy birds, with little or no road sense who take to the air and fly only as a last resort and often when it is much too late! 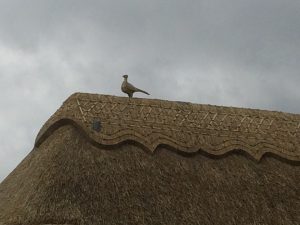