A bit of a lighter note this week; yes, it’s time for some more thatched animals. This offering

appears to be a female fox and her cub chasing a hare along the ridge of this cottage.

Trouble is, it is quite some time since I took this photo so I can’t now remember which

Village it was in? 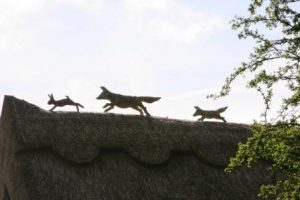 My Favourite fox poem which I remember from school, is the Thought Fox by Ted Hughes:

I imagine this midnight moment’s forest:
Something else is alive
Beside the clock’s loneliness
And this blank page where my fingers move.

Through the window I see no star:
Something more near
though deeper within darkness
Is entering the loneliness:

Cold, delicately as the dark snow
A fox’s nose touches twig, leaf;
Two eyes serve a movement, that now
And again now, and now, and now

Sets neat prints into the snow
Between trees, and warily a lame
Shadow lags by stump and in hollow
Of a body that is bold to come

Across clearings, an eye,
A widening deepening greenness,
Brilliantly, concentratedly,
Coming about its own business

Till, with a sudden sharp hot stink of fox,
It enters the dark hole of the head.
The window is starless still; the clock ticks,
The page is printed.