I recently had to condemn this Dovre Combination Stove at a house just outside Felsted, Essex. The home-owner had no idea how long the stove had been in situe as it had been in place when he had bought the property some time ago. The stove flue had clearly not been swept for a long time, if ever and I was able to remove a significant quantity of soot and tar when I swept it. However, CCTV inspection revealed that the integrity of the liner was very poor and that it had completely failed in a number of places.

Over and above this, that stove itself had been fitted without a register plate, cosqently the top of the stove was covered in a thick layer of soot and other debris, which had become wet through rain water coming down the chimney (There was no cowl fitted?). To compound matters, there was no Carbon Monoxide alarm fitted in the room. Furthermore, this rather large appliance was fitted into what was a somewhat small room. The occupants must have been melting when it was in use if not poisoning themselves unwittingly??? A prime example of what happens when the layman turns his hand to DIY in the misplaced belief that he knows what he is doing! 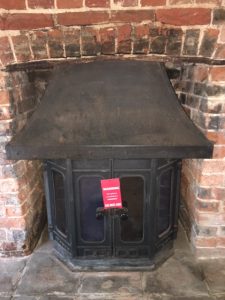