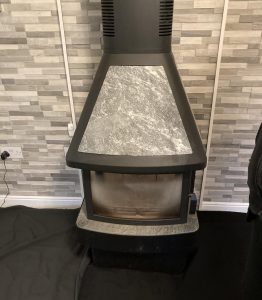 Continuing this week with the theme of unusual or rarely seen stoves. This week is about the Contura 450T Wood-Burning Stove. I had not seen this model of Contura stove, but have recently swept two at two different addresses in Haverhill. As you can see, they are a very large wood-burning stove, so I would think that they have quite a high Kw rating. Both customers told me that they push out a terrific amount of heat when they are in operation. Fortunately, both customers have them placed in rather large open plan rooms. The stoves themselves have a rather chunky, unique design, that definitely creates a presence in any room. Looking at Contura’s website it would appear that this distinctive model has now been discontinued and it no longer appears in the catalogue.

Contura Stoves are a Swedish company based in the town of Markaryd – Markaryd is a municipality in Kronoberg County at the southern tip of Sweden. Contura Stoves are known for their distinctive contemporary stove designs and the appliance of the most up to date stove technology. 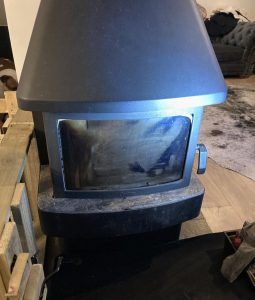