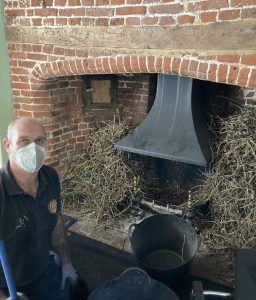 Yes, it has been a year when I have taken a large number of bird’s nests out of chimneys all across the area. Many more than I have in other years, with customers who are now spending larger amounts of time at home due to Covid and home working, many chimneys that have not been used previously are now being pressed into service. In some ways doing birds nests is the Bain of a chimney sweeps life. Of course, these nests were only removed when the birds were not nesting, as this is illegal. So, none of these jackdaw nests were removed between mid-March to Mid-August. There is an exception to this rule, nests can be removed for safety reasons and only if you have a current License from the Ministry to do so. I keep a copy of my License on the van but have never actually had to use it.

They are time consuming to remove from the chimney and it is frequently dirty work as the nest is often packed with soil, bird droppings and frequently dead birds of other vermin as well as being mixed with old soot that lines the chimney. Plenty of dust sheeting is always required.

As the Guild of Master Chimney Sweeps point out, it is Jackdaws that cause a problem for people wishing to use their chimneys. There are around 1.4 million pairs of Jackdaws in the UK! Jackdaws love to set-up home in chimneys. They generally nest in dark enclosed spaces from March / April, depending on the weather. Emily Bignell, Supporter Advisor for the Royal Society for the Protection of Birds (RSPB), said that nests found in chimneys were most often jackdaws. She added: “All birds and their nests are protected under the Wildlife and Countryside Act (1981). The birds cannot legally be removed for being a nuisance or an inconvenience.” Lawson Wight, from the Guild of Master Chimney Sweeps, said: “As the RSPB says, there can be legal obligations. However, if the nest represents a danger to the occupants of the house it’s a different matter. Seek advice from a professional sweep as individual situations can vary.” 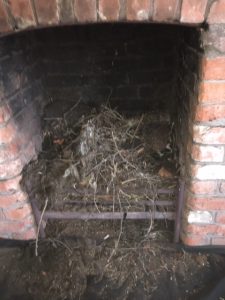 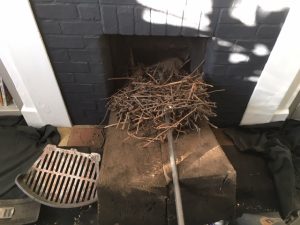 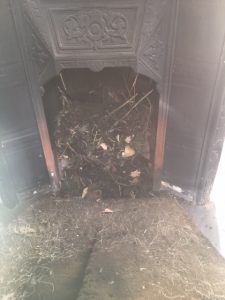 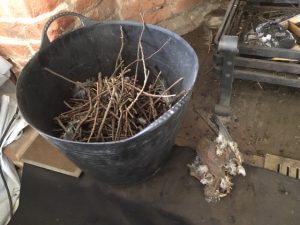