Birds Nest Removed from an Inglenook Chimney in Castle Camps

Birds Nest Removed from an Inglenook Chimney in Castle Camps

Last week I removed a rook’s nest from an inglenook chimney at this house outside of castle camps and on the way to Helions Bumpstead. I’m wishing now that I had taken a photo from the top of the scaffolding as the views of the surrounding countryside were quite spectacular. This was made all the better as the house is sited right on top of a hill. Unfortunately, I was too intent on getting the job done and forgot to take a photo whilst I was on top of the scaffolding and didn’t want to have to climb back up once the job was done!

It was very handy that the builders had been re-pointing the chimney; it made my job all the easier as I was able to attack the nest from both ends! For once the fireplace was fitted with a register plate that had a large inspection hatch, running most of the length of the opening making it much easier to get at the nest and remove the debris. Even though the nest was compacted throughout the length of the chimney (15 meters) I had it all out within two and a half hours. Something I was quite pleased with. 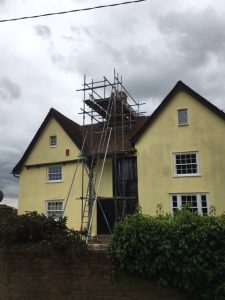