Last week I removed a small birds nest from a chimney at a house in Newport. It looked as if the birds had just begun building the nest; probably crows or magpies as there was a quantity of large sticks that had been covered with moss and soil. There was even some bits of cloth and what appeared to be bits of carpet, along with a piece of mirrored glass (yes, probably magpies). The chimney was being used in conjunction with an integral gas fire and had not been operating correctly because of the blockage in the chimney. The fire had been condemned and the gas disconnected by British Gas prior to my arrival – All gas appliances have to be disconnected by a Corgi registered fitter prior to being swept. To prevent the chimney becoming blocked again, I fitted an anti-bird cowl to the chimney pot. 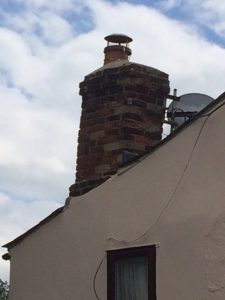