Are They Bees or are They Wasps?

Saffron Walden Sweeps Uncategorized Are They Bees or are They Wasps?

Are They Bees or are They Wasps?

I recently swept a chimney in an upstairs bedroom in a house in Hempstead and was surprised to find that the chimney contained an old insect nest. In the photograph it is possible to clearly see the honeycomb structure of the nest as it came out of the chimney. This led me to believe that it was a bees rather than a wasps nest, although when it came out there was no evidence of any honey, which made me think that the nest was somewhat old? Additionally, I don’t think wasp’s nests have a honeycomb structure? But I’m no expert so I could be wrong? When I spoke to the customer, he said that he had observed what he thought were bees coming in and out of the chimney over the summer. At least in the end a good sweeping of the chimney gave it a good clean ready for winter as well as removing the nest which would have caused a nasty blockage! 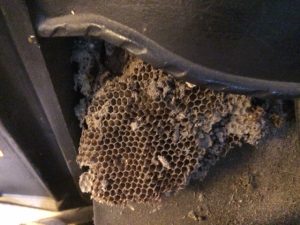