An Exotic Thatched Animal – A Kangaroo

An Exotic Thatched Animal – A Kangaroo 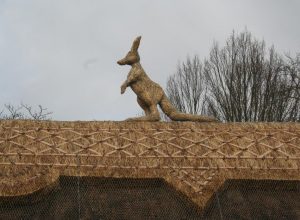 I haven’t blogged about a thatched animal now for quite some time, so I thought it was about time I put another one in – This time its one I spotted on the internet, and which is quite unusual and different than the usual British animals that appear on thatched rooves. It’s a Kangaroo, that antipodean marsupial that is a national icon for Australia. This particular thatched kangaroo was made by Dodson Thatcher’s in Cambridgeshire, although it doesn’t state what village it is located in.

The kangaroo is a marsupial from the family Macropodidae (macropods, meaning “large foot”). In common use the term is used to describe the largest species from this family, the red kangaroo, as well as the antilopine kangaroo, eastern grey kangaroo, and western grey kangaroo. Kangaroos are indigenous to Australia and New Guinea. The Australian government estimates that 34.3 million kangaroos lived within the commercial harvest areas of Australia in 2011, up from 25.1 million one year earlier.

As with the terms “wallaroo” and “wallaby“, “kangaroo” refers to a paraphyletic grouping of species. All three refer to members of the same taxonomic family, Macropodidae, and are distinguished according to size. The largest species in the family are called “kangaroos” and the smallest are generally called “wallabies”. The term “wallaroos” refers to species of an intermediate size. There are also the tree-kangaroos, another type of macropod, which inhabit the tropical rainforests of New Guinea, far northeastern Queensland and some of the islands in the region.

Kangaroos have large, powerful hind legs, large feet adapted for leaping, a long muscular tail for balance, and a small head. Like most marsupials, female kangaroos have a pouch called a marsupium in which joeys complete postnatal development.

The large kangaroos have adapted much better than the smaller macropods to land clearing for pastoral agriculture and habitat changes brought to the Australian landscape by humans. Many of the smaller species are rare and endangered, while kangaroos are relatively plentiful.

The kangaroo is a symbol of Australia, appears on the Australian coat of arms and on some of its currency, and is used as a logo for some of Australia’s most well-known organisations, such as Qantas, and as the roundel of the Royal Australian Air Force. The kangaroo is important to both Australian culture and the national image, and consequently there are numerous popular culture references.

Wild kangaroos are shot for meat, leather hides, and to protect grazing land. Although controversial, kangaroo meat has perceived health benefits for human consumption compared with traditional meats due to the low level of fat on kangaroos.