An Aga Little Wenlock Stove & a Chimney Full of Tar

An Aga Little Wenlock Stove & a Chimney Full of Tar

Linking in quite nicely with my last blog before Christmas (the sweeping of a small Coalbrookdale stove), this week I solved an issue with successor the Aga Little Wenlock. The Aga Little Wenlock is frequently a tricky little blighter to sweep; this is because usually it is not possible to simply drop the baffle. Sometimes if the baffle is not warped it can be dropped without dismantling the rest of the interior components of the stove. However, this is not usually the case, and the poor sweep has to take out all the internal components before being able to access the flue mouth. These internal components include 2 x small top metal baffles, 4 x side ceramic bricks and the large rear ceramic brick – The components are removed in this order and can be quite fiddly to take out before the large metal top baffle can be dropped. The large metal top baffle is dropped by sliding it fully forward and tilting it slightly. Phew what a palarva!

On this occasion, a stove which I have swept previously on a number of occasions, was easily dismantled in no time at all. The main top baffle dropping out effortlessly. However, when it came to sweeping the flue I found a great deal of tar deposits just sitting on top of the main baffle; a very suspicious sign, particularly as when I had swept the stove the year previously it had not produced any tar, only fine soot. Immediately I was aware that something had changed in the intervening year. As the stove and flue appeared to be in excellent condition, which meant that the tar must have been the result of the way the customer had been burning the stove in the intervening period. I determined to talk to him about it once I had completed sweeping the flue and cleaning the appliance. 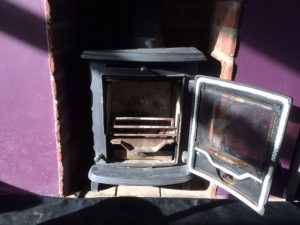 I considered the best way to sweep this problematic chimney was to power sweep it using liner rods and brush. I did this and found that after every three rods (the chimney was 9 and a half meters tall), the stove was full of tar deposits and had to be cleaned out manually using a large trug and small shovel. I carried on this process until the entire flue had been swept and I had removed one and a half trugs full of tar from the stove. I was then able to tidy up and finish cleaning the stove using the vacuum before putting it back together again. Upon discussing the operation of the stove with the customer I discovered that in the intervening year he had altered his burning habits. He had started using a lot more coal and had taken to stocking the stove up prior to bed time and closing it right down to keep it in for the morning. The customer was tactfully and appropriately advised regarding the operation of his appliance and was pointed to the Guild of Master Sweeps ‘burn right campaign – https://www.guildofmasterchimneysweeps.co.uk/burnright-information-guide/