A Dog & Duck on the Thatch in Balsham

A Dog & Duck on the Thatch in Balsham 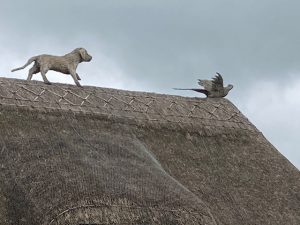 It’s a while since I had a thatched animal for my weekly blog, and I saw this pair in Balsham where I was working last Saturday. This dog and duck immediately made me think of mine and Claire’s drinking days at the Dog & Duck pub in Stanstead – A nice pint of Greene King Abbot Ale, you can’t beat it! I’m guessing the dog here is a Labrador, certainly a gun dog? I think that this pair of thatched animals are quite the most well executed pair of thatched statues that I have ever seen. I think you will admit how well modelled they are, with so much detail. The wings of the duck make it look like it is just about to take flight and there is real movement in the dogs legs.

I have actually found a dog & duck poem on the internet:

but it does take a dog and duck
to show them the way !