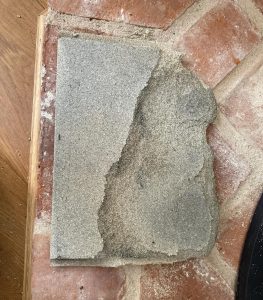 Last summer I went to an address in Radwinter to sweep an ILD 1 Wood-burning stove. As I began to dismantle the stove, I discovered that almost a third of the rear firebrick was missing and that a lot of the vermiculite from the brick was crumbled across the floor of the firebox. The customer told me that the had been experiencing problems with wasps down the chimney and that wasps had built a number of large nests in the garden over the summer. Now I know that wasps chew up wood into a pulp in order to build their hexagonal paper nests, but I had never heard or seen them chew up vermiculite board??? Clearly, they see it as an available, wood like material that was easily chewed and just made best use of it. To do so they were flying down the chimney, negotiating their way around the two baffles into the firebox, chewing the rear brick and then making their way out the stove and chimney and back to their nests. How very resourceful of them, its amazing how fantastic nature and animal behaviour can be! Not so good for the customer, I had to order her a new firebrick from ILD at some cost!