Now this is a rarity, The Morley Wood-Burning Stove, I have never come across one of these or even heard of them before! I swept this example in an address around Arkesden only just this week. As can be seen from the photograph it is enamelled like some of the retro French stoves, although sadly this example is rather chipped around the top of the stove, although in my opinion this distressing over time gives the stove a somewhat old-world charm which goes with the house it is in. I should think that the stove carcass is made of cast Iron, covered with green enamel, which is usual for a stove of its age. The photos also show that the stove has an unusual feature, a door on its right-hand side through which the logs are fed. The primary air control is also positioned on this door, the circular control near the bottom of the door, similar to those found on modern Clearview Stoves. As in this case, these old stoves quite often have the make displayed on a brass plate or plaque, like the Goodwood Stove I featured in a previous blog, which is again a rather attractive feature.

I have tried to find out more about The Morley Stove and the company that makes them, but despite extensive internet searches, I was not able to find out anything on the web! I didn’t even find any second hand examples on sale on the likes of EBay, which is highly unusual. So unfortunately I’m not able to add any further details about The Morley Stove. 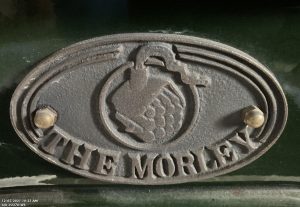 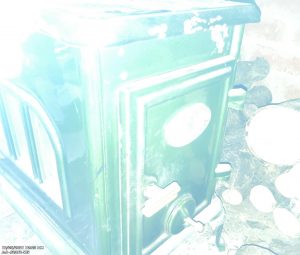