More hares, this time on a thatched roof in Stoke by Clare, indeed this is the second set of boxing hares that I have seen in Stoke by Clare; the first set were on a cottage in the middle of the villages whilst this pair are on a roof on the outskirts of the village when travelling from Wixoe. I know that you are thinking why do hares box in the first palace, well I’ll tell you all about it. Firstly it is not the male hares who box each other to win the right to mate with females as many people think, instead it will be a male and female who box each other. This happens when a male hare has been over zealous in his pursuit of a female in order to mate with her. What usually occurs is that the over persistent, unwanted attentions of the male become too much for the pursued female. For example the male might have chased the female across fields for some time in an attempt to mate. Eventually when the female has had enough of this, she’ll turn around and try to fend him off the persistent male suitor and a fierce boxing match will ensue! This mating behavior normally takes place in March giving rise to the expression, “mad as a March hare”. 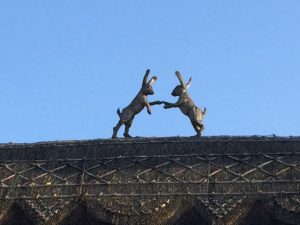