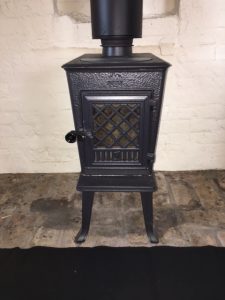 I recently swept the flue to this original Jotul F118 Wood-Burning Stove at an address in Saffron Walden. The customer told me that they had owned the stove for over 30 years and that it originally came from another property where it had been in service for a number of years. As you can see from the photo, it’s a rather unusual, quirky, but strangely attractive stove. I should imagine that it looks rather beautiful when it is a light and burning! It is also a deceptive stove, having as it does a long and rather capacious fire-box. The customer reports that it certainly throws out the heat in the winter!