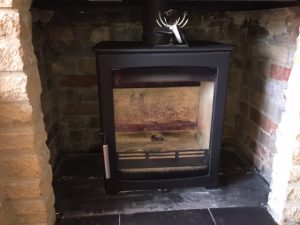 No not an unusual or rare kind of stove, so why have I included it in my weekly blog? The answer is simple and straight forward, it’s because it’s a stove I really like the look of. It has a large piece of glass in the door, so you can really see the fire when the stove is in operation and which I think gives it a very attractive, contemporary appearance. Parkray Aspect 5 Wood-Burning Stove has a 5Kw rating, so when fitted into a home built prior to 2008 it does not require any additional ventilation, making for an easier installation. I see a lot of these stoves in the area, primarily because it is one of the make/model of stoves fitted by Cut Maple Stoves who are based just down the road in New England, Sturma.

Parkray are now part of the Hunter group of stove manufactures. Hunter Stoves were founded in the West Country in 1970 and now manufacture their stoves at a site near Exeter. Hunter bought the Parkray company in 2003 and absorbed the brand into its product range. In 2008 Hunter Stoves bought a site a Camelford in Cornwall as a research and development department, but they now produce some stoves there as well. In 2015 the company rebranded as the Hunter Stoves Group and now produce such brands as; Herald, HS Gas, Di Lusso, Avalon, Cleanburn, Eco-ideal and Parkray.