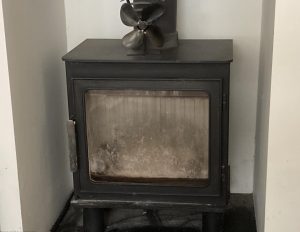 As can be seen from my blog, I do sweep a number of Nordpeis stoves, although they do remain relatively rare across the area, they do tend to be unusual and very contemporary. They also tend to be the smaller models of Nordpeis. Well for this week’s blog, I came across this Nordpeis Bergen Wood-Burning Stove at an address in Duxford, as can be seen from the photograph it is significantly different than those stoves which I have previously featured in my blogs. For one thing it has a much more traditional appearance than other Nordpeis stoves, for another it is significantly larger than other Nordpeis models that I sweep. Having said this, its size is deceptive as surprisingly the Bergen has only a 5Kw rated output. The stove is situated in a rather large room, but despite the size of room and its 5Kw output, the customer tells me that it more than adequately heats the room even on the coldest of days.

A Google search reveals that Nordpeis are based in Norway and were established 30 years ago.

It would appear that Nordpeis are sold in the UK are part of the Stovax Stove Company and are sold through approved retailers.