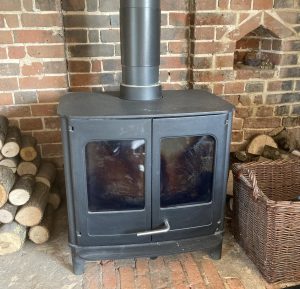 Although I sweep a lot of Morso stoves across the area, this is the only example of the Morso 7110 multi-fuel model that I sweep. So this stove is something of a rarity. This example is in a thatched cottage in Bardfield End Green near Thaxted. It is situated in a rather large sitting room, so it has its work cut out to heat it satisfactorily on a cold day. This said the customer reports that it more than adequately heats the room. As can be viewed in the photo it is a substantial appliance and has rather clean, straight lines. Very much a contemporary look set against an old vernacular building. It is that juxtaposition of old and new that works really well I think you would agree?

Morso are a Danish stove company who have been making metal consumer goods since 1953. It was Neils Christensen who founded the Morson Foundry making all sorts of products including metal stable windows, tools, pots and pans and even grave crosses. Around the turn of the century Morso began to start making tiled stoves and room heaters for schools, churches, railsways, government ministries and even to the Danish Royal Family. Indeed, so successful where they, that in 1915 they became the official purveyor of stoves to the Danish Royal Family. It was in the 1950 when tiled stoves became obsolete that Morso began producing Wood-burning Stoves.