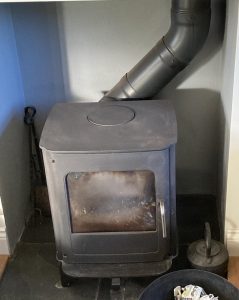 Not every stove installation is an easy and straightforward affair. Here is an example that I came across at an address in Cardinals Green recently. Here in order to match the fireplace opening to the chimney the installer has had to use anything but a vertical stove pipe. As you can see the stove pipe in this example has had to adopt a 45 degrees diagonal turn to access the chimney. I would not say that it is the most attractive of installations, but I suppose that its better this than no stove at all and I’m also thinking that once it’s had been installed a person would get used to it and not notice its strange appearance? Certainly, the customer was very pleased with the stove and reported using it every night of the winter.

I must admit that the Morso 06 is not a stove I come across frequently, in fact I only sweep one other example of this model in the area. Whilst I sweep many smaller Morso stoves, particularly the Squirrel, the Badger, and the 03 and 04. What is certain, whatever the size of the Morso stoves all my customers who have one really rate their performance and their appearance and would not swap them for a different stove. As in the case of this Morso 06, the customer told me that it warms the room fantastically well and is very efficient and economic in the fuel it uses.

Morso are a Danish stove company who have been making metal consumer goods since 1953. It was Neils Christensen who founded the Morson Foundry making all sorts of products including metal stable windows, tools, pots and pans and even grave crosses. Around the turn of the century Morso began to start making tiled stoves and room heaters for schools, churches, railways, government ministries and even to the Danish Royal Family. Indeed, so successful where they, that in 1915 they became the official purveyor of stoves to the Danish Royal Family. Its was in the 1950 when tiled stoves became obsolete that Morso began producing Wood-burning Stoves.