I recently swept this large Severn Stove in a house in Radwinter. They are a rather handsome, elegant if not a little old fashioned type of stove, but are well suited for large inglenook chimney places appertaining to large room spaces. Attractive features of the stoves are the decorative iron work, which includes latticework, decorative swans on the air intake controls and the name Severn on the top of the stove. The Coalbrookdale Company also manufactures another similar stove called the Darby which has similar ornate decorative features.

I am not sure whether these stoves are still in production and haven’t been able to find out one way or another from internet searches. I say this because I have seen a lot of Severn Stoves in and around the Walden area; in particular in Radwinter, Wimbish, Ashdon, Wendons Ambo and Arkesden to name a few. However, in all these instances the stoves have been in place for a long time, 30 years plus in some instances. This leads me to believe that the stove was very popular in the past, but is either no longer as popular, or is out of production. Certainly, at some time in the past there must have been someone in the Walden area who was installing Severn stoves as the stove of choice.

What I did find of interest whilst conducting my internet searches, was that the Coalbrookdale Company has an extremely long and interesting history that goes right back to the birth of the Industrial Revolution and far beyond. In the 12th Century the area of Coalbrookdale which is in Shropshire fell within the manor of Madeley, which belonged to Much Wenlock Priory. The monks here operated a bloomery (iron foundary) called “Caldebroke Smithy”. In 1536 bloomery recorded as still being in operation, however in 1540 during the dissolution of the Monistaries Much Wenlock Priory was closed by King Henry VIII, but the bloomery continued working. Then in 1544 the “Smethe Place” and “Calbroke Smethe” were leased to a Hugh Morrall. This is believed to refer to the Lower Forge (SJ667038) and Upper Forge (SJ669042). Before in 1545 the abbey’s lands being eventually bought by the king’s Italian physician, Agostino Agostini but he sold them in the same year (presumably at a profit) to a local man called Thomas Lawley. Then in 1572 the manor was acquired by John Brooke, who constructed a number of coal mines on his land and continued the operation of the bloomery.

In 1615 Brooke’s son, Sir Basil Brooke, bought the patent for making steel by the cementation process and built a blast furnace at Coalbrookdale. Interestingly, Brooke was arrested in 1644  by Parliament after being involved in a plot to prevent the Scottish army taking part in the English Civil War. The following year Brooke’s estate was sequestrated by Parliament but the works continued in use. Then in 1651 the manor was leased to Francis Wolfe, the clerk of the ironworks, by Brooke’s heirs.  Brooke had died in 1646 so presumably Parliament had returned the manor to his family. In 1658 – a new blast furnace and forges were built. In 1688 the ironworks were leased by a Shadrach Fox, who in 1696 was supplying round cannon shot and grenado shells to the Board of Ordnance during the Nine Years War. Unfortunately in 1703 the furnace blew up but the forges remained in use.

In 1709 Abraham Darby I acquired the lease and created the Coalbrookdale Company, an iron foundry which used coke as fuel to make pots and pans. The company had a very long history and is famous for making the first iron bridge which still stands to this day. In 1945 the company started manufacturing wood-burning stoves and the Rayburn cooker. In 1969 the company was absorbed into Allied Ironfounders Ltd.

As an interesting aside, my dad was evacuated to Coalbrookdale at the beginning of the Second World War; he subsequently spent the war living with an elderly widow helping to run her small holding. 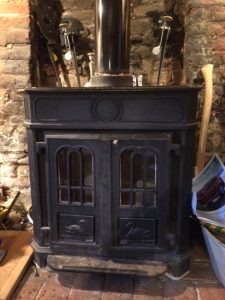