Here is another example of industrial scale sweeping that I have undertaken! This is a Gilles Biomass Boiler that was in an outbuilding on a large estate, supplying heating and hot water to all parts of the estate – The boiler is used to supply heat and hot water to the rather large main residence, some industrial buildings on the site and to a number of estate cottages. It is not a make of Biomass Boiler that I had encountered before. This biomass boiler runs by burning specially made wood pellets; they are a small pellet of compressed wood shavings. Apparently they are designed in such a way to optimize the burn and efficiency of the biomass boiler. Again, as in the previous blog to do with biomass boiler sweeping, the wood chips are stored in a hopper in a very large barn, which is directly adjacent to the shed that houses the biomass boiler. The pellets are gradually fed into the biomass boiler by a large Archimedes screw and the hopper is periodically topped up by fresh deliveries of pellets. The boiler chimney was rather large eight meters in height and had a diameter of 38cm; I swept it using manual rods and brushes; somewhat surprisingly the chimney was not particularly dirty, probably due to the very efficient operation of the biomass boiler. Fascinating stuff!

Using Google I found that Gilles: was founded in 1992 in Gmunden Austria. In the year 2000, GILLES became one of the first manufacturers of biomass heating systems to be honoured with the Austrian eco-mark and a little later, by the state of Upper Austria with the state’s coat-of-arms. In 2007, the company was taken over by the new owners, led by Wolfgang Krämer. There UK base is in Hereford 01432513777 – https://www.gilles.at/en 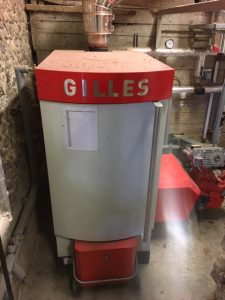