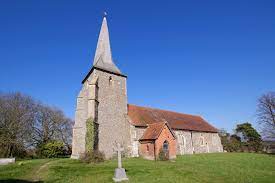 I felt that it was time for something slightly different for this week’s blog. We have been sweeping for the Diocese of Chelmsford for around two years now, completing the solid fuel maintenance for the Vicarages, Rectories and rental properties belonging to the Diocese. In consequence we have simultaneously been able to visit a significant number of medieval churches and indulge our passion for history. Most medieval churches are like an organic historical record, having in a way evolved over time and evidencing any number of building phases over time. An echo of the various people who have cared for and worshipped at the church over a long period of time. I have included here some of my favorites that we have visited in the past few months. If this blog is popular I might think about making it a regular thing as we do get to visit so many beautiful medieval churches every month. 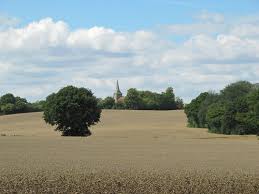 The church at Great Henny exhibits sections of 11th, 12th and 14th century work, but is most notable for its oak shingled broach spire roof, which is a real rarity. The church is also notable for it rather remote rural location and is set some distance from the village. It is very picturesque viewing the church across the corn fields with its lonely spire striking up on the skyline. Like many isolated rural churches in East Anglia its location describes the ravages of the Black Death, where whole villages shifted their loci away from their original site to escape the effects of the pestilence. The church roof is also notable, dating from the 15th century it exhibits moulded tiebeams, and braces and queen post trusses. The tower shows three stages of building activity, dating from the of 11th, and 12th centuries.

The beautiful and very historic church of St Andrew Ashingdon sits on top of a hill high above the River Crouch and from the east end of the church has panoramic views of the surrounding farmland across towards the neighbouring village of Canewdon. The church dates from the late Saxon period, but most of the existing fabric is medieval.

The church is actually rather famous for its links to the Battle of Ashingdon (Assandune -The Hill of Ash Trees in Old English). Ashingdon, or, more correctly, the land to the east of the village, is the presumed site of the Battle of Ashingdon on 18 October 1016. Ashingdon Hill is the likely location of King Edmund Ironside‘s camp, and it faces the field of battle between Ashingdon and Canewdon. Canewdon Church sits atop another hill, and beside Canewdon village was probably the site of King Canute‘s camp. Early chronicles report of fierce fighting at “Hyde Wood”, nearly halfway between the two villages. Ultimately, Edmund and the English lost the battle in which it is said that that the flower of the English nobility were killed allowing the Danish Viking Canute to seize the thrown of England. During the course of the battle, Eadnoth the Younger, Bishop of Dorchester, was killed by Canute’s men whilst in the act of saying mass on behalf of Edmund Ironside’s men. According to Liber Eliensis, Eadnoth’s hand was first cut off for a ring, and then his body cut to pieces. The Ealdorman Ulfcytel Snillingr also died in the battle. The Anglo-Saxon Chronical reports that the battle was lost because of the treachery of Earl Eadric Streona of Mercia and his troops, who changed sides when he saw how the battle was going and withdrew his soldiers from the field. Although King Edmund survived the battle and brokered a peace with Canute, he died a short time later, it is believed by treachery, allowing Canute to seize the throne. 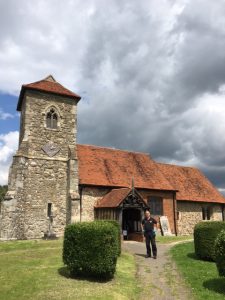 The parish church of St Andrew which lies on Ashingdon Hill, one of the parish’s three hills, was built in 1020, 4 years after the battle, by the order of the king, ‘Canute the Great‘ of Denmark. The grade II listed parish church of Saint Andrew’s is also called “Ashingdon Minster”. The first priest at Ashingdon was one of King Canute’s personal priests, a young man named Stigand, who 46 years later was the Archbishop of Canterbury who crowned King Harold and officiated at the coronation of William The Conqueror (William I), both in 1066. The priest appears on the Bayeux Tapestry with the caption “STIGANT ARChIEPS.” The church is now dedicated to Saint Andrew, but it is believed that it was dedicated earlier to Saint Michael, who was considered to be a military saint, and churches dedicated to him are frequently located on a hill. In 2006 Southend author, poet and historian, Ian Yearsley, wrote and published a commemorative epic poem about the battle, called The Battle of Ashingdon (1016).

St Andrews is a beautiful grade 2 listed church sited on the North bank of the River Crouch. The church is largely late 14th Century Perpendicular in style. It was altered in the 16th Century and then restored by the Victorians. The majority of the church is constructed from stone rubble dressed with knapped flint, Limestone and Clunch. The chancel is of Red Brick in English Bond and it has a roof of handmade red clay peg tiles. It gives the church a very attractive and regal appearance, giving the impression of a very high status church, over and above that of a simple village parish church. Above the West doorway in the tower there is an inscription in black letter ‘+ Orate pro animabus dominorum Johannis Wylson et Johannis Hyll quorum animabus propicietur deus amen’, and which is decayed at the bottom. What John Betjamin would describe as ‘most pleasing decay’! In the nave there are brasses (1) of William Hyklott, 1508, ‘which paide for the werkmanship of the wall of this churche’, figure in civil costume, Trinity, and indents of 2 children (2) to Margaret Hyklott, 1502, figures of 2 daughters, one habited as a nun, a Virgin and child, indent only of main figure. Under the font is a floor slab to Elizabeth Gordon, 1701. There is also a richly carved font with octagonal bowl dating from the 14th Century. On it there are carved figures of the baptism of a king, a man and woman, the martyrdom of St Andrew, defaced angels, a king and a queen and a seraph. 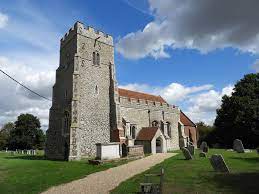