I recently swept this very attractive open fireplace at a house in Radwinter. As you can see I had an audience for the job, this is Maisey the chocolate Labrador. Maisey took a real liking for my dust sheets and wanted to do nothing more than just stretch out and have a bit of attention and company. Maisey is really old, although I can’t remember how old she is other than for a dog she is a very stately age. She is now blind in one eye, but she still gets about and her owner tells me she still enjoys her food and walks.

As you can see from the photo’s the fire place was very attractive, and had beautiful tiles along each side, setting off the ornamental wrought ironwork and making it very eye-catching. There are companies that now renovate these Victorian fireplaces and they can command rather high resale prices; you only have to peruse the internet to see what I’m talking about. Many of the reproductions sell for quite a few hundred pounds whereas the originals can sell for figures over £1,000. Indeed, original and reproduction tiles for Victorian fire places sell for rather high prices on their own.

You might be able to see from the photograph that I swept this chimney using traditional rods and brush. It was rather surprising that for a reasonably small village house, this fireplace had a rather tall chimney; it turned out to be over 15 and a half meters tall from the bottom of the chimney to the pot at the top of the chimney stack. Quite surprising! It turned out to be rather dirty too; well it was a very long cold winter last year after all! 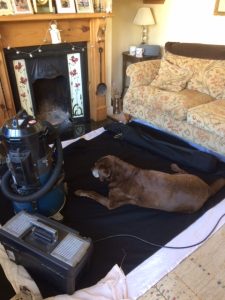