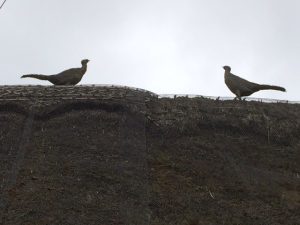 What a fantastic week of weather we have just had, lovely warm sunshine all week. Yes, spring has definitely been in the air and there are spring flowers everywhere, snow drops, crocuses and daffodils. With spring beginning to arrive I thought it was time to have another thatched animal in the blog. I saw this thatched pair on a roof in Stambourne when I was out that way sweeping. Not a village we advertise in, but one that we do a great deal of work in. Some of these jobs are for Cur Maple Stoves and Fireplaces and some of the others are our contract work for Eastlight Community Homes, but the majority of jobs are private customers who have come to us from word of mouth, the internet or just seeing our van around the village.

These two pheasants made me think of a Mexican standoff for some reason, to Western gunslingers facing each other off! Which one will be the quickest on the draw!

The internet tells us that pheasants are birds of several genera within the subfamily Phasianinae, of the family Phasianidae in the order Galliformes. Though they can be found world over in introduced (and captive) populations, the pheasant genera native range is restricted to Asia.

Pheasants are characterised by strong sexual dimorphism, males being highly decorated with bright colours and adornments such as wattles. Males are usually larger than females and have longer tails. Males play no part in rearing the young.

The best-known is the common pheasant, which is widespread throughout the world, in introduced feral populations and in farm operations. Various other pheasant species are popular in aviaries, such as the golden pheasant (Chrysolophus pictus).

Interestingly, Pheasants are native to Asia, but were introduced into much of Europe by the Romans, possibly arriving in the UK with the Normans in the 11th century.